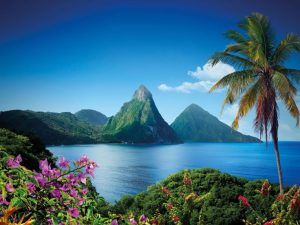 Mustanco was a mountainous island country in the Indian Ocean to the south west of Indonesia. Now you cannot find it in the map as it was engulfed by the ocean after a great earth quake, hundreds of years ago. It was ruled by a kind and wise ruler called Sheik Musthafa Kamaal.

Mustanco lay a little south of the tropic of Capricorn and had a very fine climate. As the spring commenced, bright pink flowers blossomed on the apple trees. The orchards appeared to be a pink carpet on which green dots were sprinkled.

As the spring progressed, tiny round apples formed from the pink flowers and with the onset of summer beautiful, delicious red and yellow apples were hiding in the thick dark green leaves.

Mustana, the biggest valley and the capital, was world famous for its ‘golden delicious’ apples. The Mustancoans were mainly farmers. Each and everyone there lived happily as Sheik Musthafa’s government was looking after them so keenly. All the needs of people were met in time. Enough scavengers were there to keep the streets, city and the countryside neat and clean. The streets were maintained so perfectly that there were no gutters or puddles after rain. Every one in and out of the country praised the generosity, affection and wisdom of Sheik Musthafa Kamaal.

That day too, in Mustana, every thing was as usual. Sun rose in the east. Men were ready for their works, women busy in kitchen, children getting ready for their schools.

Things changed all of a sudden. All the people started running towards the main street, where there was a sharp curve and a steep cliff. A huge rock was in the middle of the road almost closing the whole road. People were crowding around it. As usual in any crowd, discussions, arguments and counter arguments started.

“Last evening it was not here. How did it come in no time?”

“No sign of any land slide.” “There was not even a slight rain last night.”

“What is this road department doing? All fools, simply sleeping in the offices??”

“There is no one to see the troubles of the public. All sitting in the offices and enjoying.”

The crowd slowly melted off. Many of them with great difficulty squeezed to the other side of the rock and went for their work.

In the evening, they were on the way back home. To their astonishment, they found the rock in the middle itself, still unmoved!!!

They started shouting slogans, in protest against the government and even the Sheik.

“Is this government dead?? Isn’t there anyone to see this??”

“Nowadays Sheik is only after luxuries and foreign trips!!”

“Musthafa Kamaal is a foolish ruler!!” “Sheik Musthafa should quit his office immediately.”

“Down! Down!! Sheik Musthafa.”

The mob was becoming more and more restless. Then an old man with grey hair and beard came with a crowbar. And the crowd turned to him.

“Where were you, old beggar, all this time? You are simply earning salary and doing nothing. How will this country develop??”

“Hey old guy, isn’t there anyone else in your lazy department?”

The old man gave a deaf ear to these comments and slowly started his work. He pushed the crowbar into the bottom of the rock and started to push. The unrest in the crowd increased and they started to tease him again.

“This man will take a year to roll it down.”  “He will only soil the road, and never move the rock.”

But no one came with a helping hand to this old man. He was pushing and pushing and slowly made a tilt of the rock.

A wholehearted push by the old man rolled the rock all the way to the side of the road. With an ear deafening sound the rock went down the cliff.

To everyone’s surprise there was a pot full of gold coins under the rock. The whole crowd moved towards it and claimed for it. The old man stopped them with his crowbar and said.”These coins belong to me only as I alone removed the rock. This is the reward for removing the rock. “NO!!NO!!” cried the crowd. “You cannot take it. As it is from the road, every one of us, using the road should get the share.”

As the mob was about to snatch the pot, the Royal Soldiers came galloping. The Chief of the Army saluted the old man and got down from his horse. “Your Excellency, we hope we are in right time. You are not hurt, aren’t you?” he said and handed over the royal robes to him. The old man came out of his disguise. He threw away his grey wig and the beard. He put on the royal robes.

The people were stunned to see Sheik Musthafa Kamaal in front of them. They all were ashamed and kept their heads down.

Sheik Musthafa addressed his subjects,” Dear Fathers, Mothers, Brothers, Sisters and children, our country is a small patch of land, while comparing to the countries of the world. The real strength of our country is the people of it, which are you, the hard working and patriotic people, the people who are ready to sacrifice anything for their country and the people who think what I can do for my country instead of what my country gives to me.” He then kept the pot of gold coins by the side of the road and said, “If anyone of you feels that, you should get a share of it, any time you may take from it.

Later, when the land was drowned, the pot with all those gold coins sank into the ocean. Still it may be there on the ocean floor.