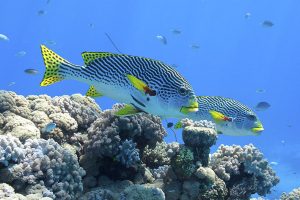 Fish is a food of excellent nutritional value, providing high quality protein and a wide variety of vitamins and minerals. Compared to vegetables fish can provide more amino acids which are essential for human body. We should eat at least two portions of fish a week. Fish and shellfish are rich in proteins and minerals.

Fish can be categorized into oily (fatty) and white (non fatty) fish. Oily fish such as Sardines, Herring, Mackerel, Tuna and Salmon are rich sources of omega 3 fatty acids.  This is vital to normal brain development in unborn babies and infants. Most of the brain growth is completed by 5-6 years of age. At birth   brain weight is 70% of an adult, 15%   brain growth occurs during infancy and remaining    brain growth is completed during pre-school years. Oily food is a good choice for the diet of children and pregnant ladies.

White fish also contain omega 3 but at much lower than oily fish. Shark, Marlin, Flying fish and reef fish are some of white fish. Shellfish such as squid, crab, prawns, lobster, clams etc are low in fat, rich in minerals and provide protein. But it should be cooked properly and avoid eating raw shellfish to reduce the risk of getting food poisoning.

The Japanese include more sea food in their diet. Research in them shows that:

This shows the importance of fish in the part of our diet. Maldives is blessed with sea food resources.  We should use these resources in a sufficient way. Marine foods are healthier, safer and more nutritious than any other food. Overall it is the cheapest food available in the world.